Working Over 600 Muscles in Just a Few Short Minutes... Kettlebells are The Most Versatile Training Tool in ANY Gym!

Hey, my name is Dan Clay and I’m the founder of Dangerously Fit.

…I wanted to create a set of Australian premium grade kettlebells that were unmatched in quality, performance, and value for money.

DANGEROUSLY FIT KETTLEBELLS ARE BUILT TO LAST A LIFETIME! Dangerously Fit Kettlebells are manufactured using a cutting-edge gravity cast moulding process ensuring a smooth finish with no chips, cracks or uneven surfaces. This consistency in the moulding process creates a perfectly balanced kettlebell which is highly accurate, ultra-durable and free from putty or other fillers used to mask imperfections.

Most kettlebells on the market have their handles welded on which can break off over time. Our innovative gravity cast moulding process enables us to make kettlebells from one solid piece of iron rather than multiple welded pieces. This creates a stronger, more durable kettlebell free from weak welding points.

We guarantee a professional-grade kettlebell produced within a weight tolerance of +/- 3%. We only accept the very best kettlebells that come out of the mould and reject any kettlebell that doesn’t meet our standards. Our casting process ensures your Dangerously Fit Kettlebell is strong & durable, free of edges or casting marks and with a powder coated finish that’s grippy but smooth.

Our kettlebells have a matte black powder coat finish that assists gripping and resists chipping. Powder coating looks great, provides a grippy surface when your hands are sweating and holds chalk far better than other alternatives like epoxy. Powder Coating is one of the most durable paints available and will help prevent your kettlebell from scratching, rusting and flaking which can happen with a low-grade paint finish.

The days of aimlessly searching for your desired weight are over! Our kettlebells have strategically colour coded bands painted onto the handles for easy identification of weight sizes. Each kettlebell is associated with a different colour allowing you to quickly identify your desired weight through sight alone saving you valuable workout time.

The logo and kilogram measurement are cast into the mould to increase comfort during lifting. Some kettlebells have their logo’s protruding which causes discomfort when connecting with your forearm. Even worse, are the kettlebells that have a logo glued to the front, leaving you with a hole when it eventually falls off and causing you even more discomfort.

Finally… an Australian kettlebell with a lifetime warranty! We guarantee the structural integrity of your kettlebell for life. Dangerously Fit Kettlebells are built to last a lifetime and are so strong they’re literally unbreakable! Check if anyone else stands behind the quality of their kettlebells the way we do. ANATOMY OF A KETTLEBELL

There are three main parts of the kettlebell;

The empty space between the horns and handle is known as the window. 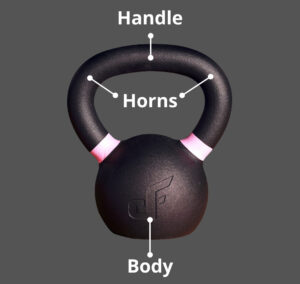 WHAT IS A KETTLEBELL?

A kettlebell is a sphere-shaped cast iron or cast steel weight that resembles a cannon ball with a handle.

There are two types of kettlebell; regular cast iron and competition (pro grade).

Regular kettlebells have a slightly larger handle allowing for both one-handed and two-handed exercises.

As the name implies, competition kettlebells are used during kettlebell competitions where exercises are performed for time.

Competition kettlebells are always the same size even if the weight varies; this ensures consistency of holding when performing kettlebell exercises.

The handles are usually smaller and squarer in shape, allowing for less movement of the hand which is more suited for single arm exercises.

THE HISTORY OF KETTLEBELLS

In Russia, kettlebells are a matter of national pride and a symbol of strength. Kettlebell competitions have always been a part of the Russian culture since the early days of the kettlebell, where villagers would compete at fairs and festivals to prove who had the best skill, endurance, and strength.

In 1948, the ‘first’ official All-Union kettlebell competition took place, and “was attended by more than 200,000 people, from then on, kettlebells went from being used for general physical conditioning to a sport of its’ own”.

In Russia and Eastern Europe kettlebell lifting is an international sport with local, national and world championships.

They are also the primary equipment used in the weightlifting sport of girevoy. They provide a highly adaptable training device that can be used for a variety of different purposes.

Sigmund Klein set up a weightlifting gym in New York that became famous in the 1930s and 1940s for producing strongmen and kettlebells were a popular item of training equipment.

Soviet weightlifting legends such as Vlasov, Zhabotinskiy, and Alexeyev started their Olympic careers with kettlebells.

From being used as a weight for market products in Russia, to a tool for athletic development and health, the kettlebell slowly developed into a sport of its own. By 1974 it had been officially declared the ethnic sport of Russia and in 1985 the First National Championship of the USSR was held in Lipetsk, Russia.

Kettlebells in the USA, Europe and Australia were non-existent in the latter part of the 20th century. In 1998, Pavel Tsatouline, former Soviet Special Forces physical training instructor, and considered the “modern king of kettlebells”, wrote an article discussing kettlebells in a popular American magazine for strength athletes; the article was extremely well received and kettlebell training in the West took off.

Traditional kettlebell exercises train movements that strengthens groups of muscles in unison, rather than just a single muscle in isolation. Unlike many other forms of resistance training, kettlebell exercises tend to work across all 3 different planes of motion: 1) sagittal 2) frontal 3) transverse. This is of particular benefit because the human body naturally moves three dimensionally in all three planes.

Functional training improves a person’s ability to cope with the demands of their everyday life. The human body is designed to move through the 7 Primal Movement Patterns; 1) hinge 2) squat 3) lunge 4) push 5) pull 6) rotate 7) gait. The kettlebells unique design lends itself perfectly to strengthening these important every day movement patterns.

The kettlebell is the most versatile training tool in ANY gym. Push, pull and swing the kettlebell in any direction to develop strength, burn fat, increase cardio, improve endurance and build muscle. The kettlebell is the Swiss army knife of your gym and can be used in many different ways ensuring a challenging workout for lifters ranging from beginner to advanced.

The main lifts utilise the ‘hip snap’ movement, which targets the posterior chain muscles (erector spinae, gluteus maximus, hamstrings). These muscles are known collectively as the ‘power house’ of the human body. The glutes and hamstrings are responsible for the movement that creates hip extension and the posterior chain as a whole, this is very important for many sports that involve running, jumping, throwing, punching and kicking.

Unlike traditional dumbbells, a kettlebells centre of mass is extended beyond the point of contact. This extra leverage facilitates ballistic swinging movements that develops acceleration and deceleration like no other training tool. The very nature of the main kettlebell lifts ensures that strength and power are trained effectively.

The kettlebell is a great piece of kit to add to your training arsenal. They are a low-cost alternative to other forms of resistance training and provide much more bang for buck. The lifting techniques can be learnt easily with many exercise progressions as you become a stronger, more skilled lifter.

Unreal equipment! Training hard and working my way up to getting the whole set

Very impressed with the speedy delivery - arrived the very next day. Looking forward to using.