Dad Manages To Lose Weight To Save Daughter’s Life

Anybody that has ever attempted to lose weight will say that it isn’t a simple task. But a dad of three was able to get rid of over 40 pounds within two months, and that he had the most crucial reason in the world to make it happen. Eduardo Camargo, 35-year old, dropped several pounds in just two months to be a qualified donor of liver to his daughter who seemed to be diagnosed with biliary atresia – it is an ailment where a liver’s bile ducts works are absent or blocked.

When Eduardo’s daughter, Jazlyn, was just 5 months old, she was in need of a liver transplant. Eduardo knew from the start that he must be the donor, but to be able to achieve this, he was required to lose lots of weight. Moreover, he had problems with his liver, but his condition – fatty liver disease – could be made safe to her daughter if he got healthier. 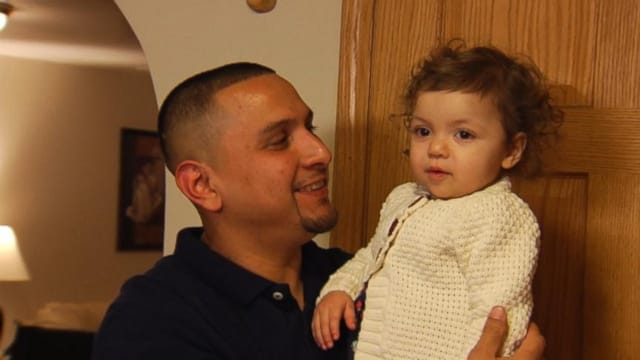 Obesity significantly has an effect on the health not just of those who are overweight or obese, but people who rely on organ transplants, as well. Since the number of obese people increases, the percentage of patients in need of transplant increases and the percentage of suitable organs/donors drops, a situation that makes many in desperate hope, and also probably constant fear.

On the other hand, organ transplants into infants are mostly difficult due to their size. Organs of adults can’t always match into babies; meaning parents need to wait for organs through pediatric cases being available, and not all parents of a dead child would like to donate their little one’s organs.

However, Eduardo’s daughter did not have to be put on the waiting list. The liver is among some organs that may be sliced into pieces and then transplanted. This means that an infant can frequently have an adult’s liver transplant. In addition, the transplant may come from the living donor instead of needing to wait for somebody to die.

Luckily for Jazlyn, her father had been an ideal match. The only issue was his weight. Eduardo weighs 210 pounds, and with that he was adding a strain on his liver that only means that he was not a candidate for the surgery.

However, this determined dad was not going to quit. For 2 months, he began running on the treadmill in a gym on alternate days before going to work. He started to eat more vegetables, monitored his portions, and just drank water. He went on to get healthy regardless of the nausea and pain he often experienced.

Watch the video to know more about his weight loss journey to save her daughter.

And it seems like all of the hard work and effort has paid off because in just 2 months, he weighs 180 pounds and was able to reduce the amount of fat in his liver up to less than 2 percent. Doctors managed to make use of his liver for the transplant and the surgery went well.

If you want to live a healthier life, incorporate exercise and proper diet into your daily routine. We can help you get started. Feel free to contact us by clicking here.

You are here:
PrevPreviousExercise Equipment To Begin Your Fitness Resolution On The Right Track
NextThe Benefits of Working Out with your SpouseNext