Childhood obesity is without a doubt a major concern, but there has to be an easy way instead of subjecting children to weight loss surgery. Regrettably, that is happening as early as the age of 2 now, and it is distressing and unbelievable that it is.

A boy in Saudi Arabia is now the world’s youngest patient who undergoes weight loss surgery. According to the reports, the boy has a BMI of 44.1 prior to the surgery, placing him above the healthy range of 18.5 to 24.9. Doctors say he was not struggling with any genetic or hereditary causes of obesity, but his weight was resulting in other physical problems like sleep apnea.

Clearly something must be undertaken, and his parents apparently tried out two attempts at going on a diet. One during 14 months, which led to a 17-pound weight gain, but it is unknown if they stuck to the diet following that. The moment the boy reaches 72 pounds, his family and also his doctors made the decision that surgery was the best solution.

It did really work. He was observed for 2 years following the surgery, and the doctors said that his BMI lowered to 24. 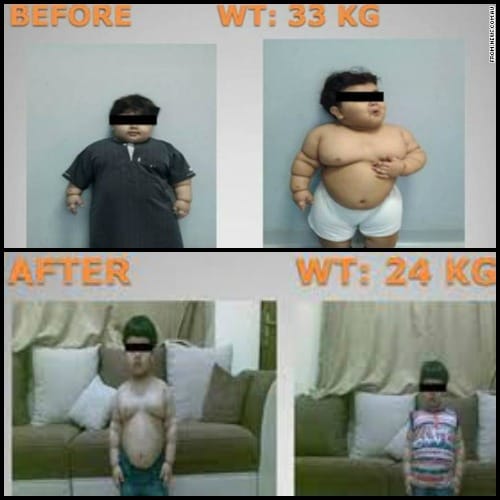 Check this interesting article from the examiner.com:

Located in Saudi Arabia, the two-year-old weighed 73 pounds. After trying various other remedies, doctors decided on surgery to alleviate the toddler’s weight-related sleep apnea and bowed legs. And the surgery was successful: Within two months of the procedure, the boy lost 15 percent of his weight. In two years, he weighed a relatively normal 50 pounds.

Exercise and dieting are the suggested option for obese children, although it is not beneficial for everybody. Some children and teenagers are still being affected by their weight, no matter what other methods they may have attempted. Simply because they have low self-confidence, it is not easy to maintain a weight loss program when they’re already coping with anxiety along with other feelings. Oftentimes, weight loss surgery enables them to slim down more rapidly, and get healthier much faster. For children who might be increasing their chances for stroke, high blood pressure and heart attack at a very young age, it is vital that surgery become an option if other weight loss strategies aren’t working.

Being a parent, it is not easy to find out whether an elective surgical treatment is needed. In either case, there’s definitive proof that obesity is really a growing problem with children and teenagers, which is resulting in negative health issues.

Even though doctors can treat the above conditions, the very best remedy for childhood obesity is prevention. Work together with your kids to determine eating healthily habits, and promote education of diet. Moderation is important, so control your child’s calorie intake and steer clear of convenient processed meals. Be positive for making your children more active. Take part in activities together and encourage activity. Children don’t always require a structured fitness program, so be positive in taking part in fun activities together with your child.  Using these steps and effort, we are able to give a higher quality of life for the children and break the upward trend of growing rates of childhood obesity.

Want to lose weight the healthy way? Then sign up for our online fitness coaching program and see for yourself!