If we live in a perfect world, everything would be equal, but life is just not that way. Sad to say, men do lose weight faster than women. Men and women usually lose weight at different levels due to physical differences. Men’s bodies are typically bigger and have much more muscle, and they are likely to burn off fat faster because of these factors. Even though women can’t change their body to burn off calories similar to those burned by men, they can stimulate their metabolism by just increasing muscle mass. 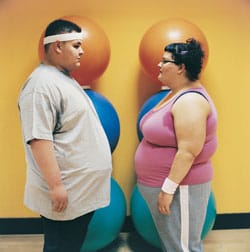 Here are the reasons why men are likely to lose weight faster compared to women.

Generally, men are apt to have more muscles than women. Muscle tissue is extremely active, and it needs much more calories in order to maintain it. Even if you are at rest, your muscles are burning calories. Therefore, if you have a great amount of muscle mass, your metabolism will work much faster and also you burn a lot of calories. This is the reason why strength training could be as essential as cardio if you would like to achieve weight loss.

Men typically lose more body heat as compared to women because generally they’ve got larger body surface areas. Once you get rid of body heat, it causes your metabolism to elevate as your body needs to work hard to keep a normal body temperature. This means that while your body warms itself up in cold weather and then cools itself down during warm weather, it’s compelled to burn a lot of calories, and this is more prevalent in men.

How Fat is Stored and Retained

Women normally store and retain a lot more fat as compared to men because of the higher estrogen levels that retains fat on the body. As a result, women need to work much harder to lose weight at the same pace as men.

Men have got higher levels of growth hormone compared to women and have higher testosterone levels. These hormones have an amazing effect on an individual’s metabolism and their speed and rate of fat loss. Higher growth hormones and testosterone levels also play a role in effectively building muscle mass. Men normally generate higher levels of these hormones, allowing them to lose weight faster than women.

Read more from Daily Mail to know some other reasons why men lose weight faster than women.

If you’ve been left frustrated by the speed at which your other half sheds the pounds, you certainly aren’t alone.

A study that looked at the progress of 1.2 million slimmers found that men are usually more successful than women because they’re more focused and have fewer food-related emotional issues.

According to Slimming World, who conducted the research, men also tend to be better at ignoring temptations such as a proffered plate of biscuits and doesn’t comfort eat when things go wrong.

Even though men lose weight much easier than women, the fundamentals of weight loss stay the same for both genders. A regular exercise coupled with a well-balanced diet, as well as, a sensible weight loss goals will be effective for anyone who stays disciplined and committed.

Do you need help in losing weight and keep it off forever? Dangerously Fit Online Weight Loss Coaching will help you achieve your weight loss goals, and we also tailor workouts that suits your fitness needs.

You are here:
PrevPreviousGet Fit on the Go With TRX Suspension Trainer
NextAre Grains Really Essential for a Healthy Diet?Next